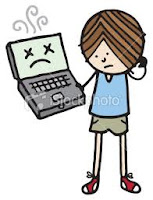 As happens with most computers, ours caught a virus.  My husband, through his research, determined that we had a particularly pernicious virus; one that would require him to download special software to remove.  So he downloaded the "special software" and scrubbed our computer.  He deleted all the infected files and then deleted our old browsers and installed new. 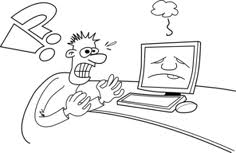 The problem arose when we tried to access the internet.  We knew we were connected because the computer told us so.  We had squeaky clean new browsers and we were cured of the awful virus that was diverting all our web searches to other pages, so now what was the problem?  My poor husband sat upstairs in our office for two days trying to figure it out.  Each evening he would come downstairs looking somewhat defeated and check his email on our other computer.

"Hon, would you take a look at the computer while I'm at work and see if you can get it to go online?" he asked.  Fine.  But if he couldn't do it with a master's degree in Computer Mumbo-Jumbo, what was I going to do?  So I tried.  Now we had each attempted tweaking and adjusting settings to find and fix the problem, each of us suspecting the other of having great technical abilities that neither of us apparently possessed.  Each of us failed.

The IT department at my husband's place of employment recommended PC eSupport.  They charge an affordable flat rate no matter how long it takes and they don't charge if the can't fix it.  I supposed it was worth a try.  So I called.

Don't mind the hookers on their web page.  (Hey, sex sells, you know!)  Despite the somewhat collegiate looking website, they were entirely professional and made an appointment to have a technician call me within the hour.  The technician called 20-30 minutes later, had me download a few programs to my laptop and move them to the desktop computer.  Then he walked me through starting the programs and running them.  The technician explained that the programs would need to run a few minutes and that he would call me back in about five.

Well, anyone who has ever worked with technical support and actually sat by the phone waiting for the technician to call you back in "five" knows that you have time to shower, run to the grocery store, start dinner, and walk the dogs before you will hear back from them.  So I went downstairs to make a pot of coffee and wait.  As I am rinsing out the pot, my technician calls me back.  He tells me that (not asks me whether) the program has completed.

Thinking there would be more action required of me, I explained that I needed to go back upstairs.  "No need," he said.  "I just wanted to let you know that the program worked and I am in your computer repairing it now.  I will call you back when I am finished."  I didn't know what to say.  I think I managed to eek out, "Um, OK," before hanging up.

I made my coffee and went up to watch.  I am always fascinated by the "ghost in the machine" when they take control via remote access.  I watched as he deftly moved programs around and deleted and added things to my computer.  After a total of about fifteen minutes or so, he called me back and told me it was working now.  Additionally, he had found a few more viruses and removed them and then gave the whole computer a "tune up."  I was dumbfounded.

When he asked if I wanted to purchase six months of ongoing virus support from them, I immediately replied in the affirmative.  OMG!  These guys are awesome!  I would call them again in a heartbeat, especially now, since I am pre-paid.  So now you know.
Posted by Michelle at 7:30 AM No comments:

First, I will tell you that I am the proud owner of two dogs and two cats.  If I were running a contest on which animals do a better job at protecting the family from harm, intuitively, I would hand the award to the dogs.  If anyone even thinks about walking past our house, they both lunge at the window and bark their fool heads off.  But a recent discovery may have changed all that.

This morning I awoke and, as usual, headed for the back door to let the dogs out.  As I passed the French doors in the dining room, I spotted a long, black, furry thing on the carpet.  I thought, at first, that it was one of the dogs toys that Chloe, our Golden Retriever, had chewed all the stuffing out of and had then continued to chew the fur carcass until it was soggy and slobbery looking.  This is not an unusual occurrence with her.  But I couldn't recall having given her a toy with such dark fur.  I didn't see any stuffing lying around, either.

I moved in closer.  I could see a paw.  With claws.  There was a tiny amount of redness at the middle of the thing, so I deduced that it had, at one time, contained blood, not fluffo-fill.  I look at Chloe.  She is looking at it and then me.  The expression on her face is one of guilt, although, I believe it is guilt because she knows she was licking the thing, not because she killed it.  Chloe is a poor inbred puppy mill victim with severe hip dysplasia.  On her best day, she might catch her own tail.

Penny, my Chow mix is standing behind me.  Her expression is one of confusion.  She doesn't appear to even realize there is a dead animal on the floor.  She had been shut in my bedroom with me sleeping and we got up together, so she is apparently oblivious to the current situation.  She simply wants to know what the hold up is.  Why haven't I opened the door and let her out? 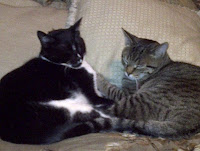 The cats: Boo, the black and white male, is MIA and Wookie, our grey stripy female, is acting curious. I head to the kitchen to get a paper towel to pick up the dead thing and see if I can figure out what it is.  Wookie follows me.  I put the dead thing on a bed of paper towels on the counter and Wookie is all over it.  I push her away and try to get a good look at the thing.  It appears to be a black squirrel by the tail, but I am still not sure. 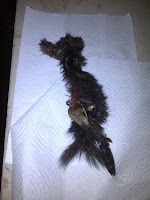 I put the thing in the garage for my husband to ID when he comes home from work.  I email him the situation.  He believes that the dogs probably found it dead in the yard last night and brought it in when he let them out for their final pee.  His theory is flawed, however.  Chloe is very impulsive and can't leave a chewy thing alone.  When we give the dogs chewy treats, Chloe eats hers immediately and without reservation.

Penny has always liked to savor her treats.  When she was young, and before we had Chloe, I would give her a chewy treat like a bone, and she would lick at it a little and then walk around the house with it in her mouth, setting it down here and there until finally she could get outside with it.  Then she would bury it in the back yard for later.  Sometimes later would never come and doing yard work, I would find buried a green pig's ear or something.

She's an old girl now, but she still likes to take it slow.  Unfortunately, she doesn't hide her treats anymore and the minute she looks away, Chloe, having already inhaled her treat, steals Penny's and devours it.  Penny's a good sport about it most times.

Anyhow, after the dogs came in from their evening potty break, they laid at our feet and slept while we watched TV and then went to bed.  There is no way, if there had been a kill in the house, that Chloe would not have been caught licking the stupid thing all night.  So where did it come from?

My only theory at this point is that, somehow, the squirrel broke into the house and one of the cats, most likely Boo, did their job and caught him.  He broke into a house with two cats and two dogs.  That is like a burglar breaking into a house where a cop with his loaded service revolver lives.  That was one brave little animal... and dumb, too.  Score one for the felines.  Viva la Cats!
Posted by Michelle at 3:39 PM No comments: